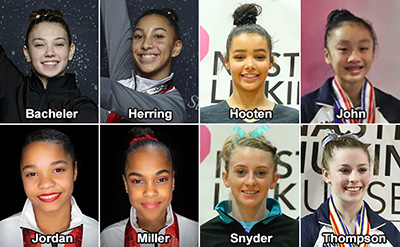 INDIANAPOLIS, January 22, 2019 – Action in the 2019 Nastia Liukin Cup Series will resume next week, with three events slated for Jan. 31-Feb. 3: Buckeye Classic in Columbus, Ohio; Chow’s Challenge in Galveston, Texas; and Fiesta Bowl Invitational in Phoenix, Ariz. Performances at the 18 invitational meets in the Series determine the gymnasts who will compete in the 2019 Nastia Liukin Cup on March 1 at the Greensboro (N.C.) Coliseum. 2019 is the 10th annual edition of the Cup, which was started in 2010 by 2008 Olympic all-around gold-medalist Nastia Liukin.

Last weekend’s qualifiers are listed below by competition.

The upcoming invitationals participating in the 2019 Nastia Liukin Cup Series are listed below.

To purchase tickets, call Ticketmaster’s charge-by-phone line at 800-745-3000, or visit ticketmaster.com or the Greensboro Coliseum Complex Box Office. Group tickets may be purchased by calling 336.373.7433. Discounted tickets are available through gymnastics clubs participating in the gym club ticket program.