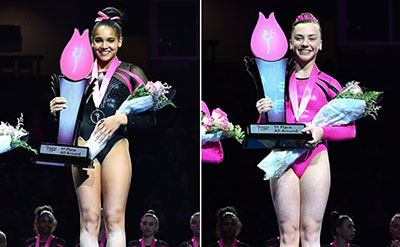 In the senior competition, Bryant took the title with a 38.700 total. She vaulted a big front-handspring, front pike half out to score a 9.875. On the uneven bars, Bryant performed a double front dismount for a 9.650. Bryant scored a 9.525 on the balance beam. She finished the competition on the floor exercise with a 9.650, where she opened with a double front and closed with a strong front double twist.

“It feels amazing to win the Cup, and I’ve had a blast,” said Bryant, who is competing in her second Nastia Liukin Cup. “I’ve been training really hard for this, and my hard work finally paid off. Winning this has boosted my confidence for state, regionals and nationals.”

In her third straight Nastia Liukin Cup, Andrea Li of Aurora, Ill./Legacy Elite Gymnastics, finished just behind Bryant with an all-around score of 38.625. Li began on the beam, where she executed a front aerial, a back handspring, layout stepout series and a double twist dismount for a 9.725. On floor, she tumbled a double pike and a two-and-a-half twist, claiming a 9.450. She performed a clean Yurchenko full on vault for a 9.750. In the final rotation, her difficult uneven bars routine included a Jaeger, Pak salto and a Shaposhnikova with a half turn. Li was in a three-way tie for the top uneven bars score of 9.700 with Raegan Walker of Temecula, Calif./SCEGA Gymnastics, who finished third in the all-around, and Kiya Johnson of Desoto, Texas/Texas Dreams (fifth in the all-around).

Walker rounded out the senior award podium with a 38.575. On vault, Walker performed a clean Yurchenko with a half twist (9.725). On bars, where she tied for first, dismounting with a clean double layout. Walker posted a 9.625 on beam. She tumbled a double pike, a front layout to front full and double tuck on floor, scoring a 9.525. Natalie Wojcik of Douglasville, Pa./Stallone Gymnastics, was fourth in the all-around at 38.550.

Vetter won the junior all-around crown with a 38.175. She vaulted a Yurchenko full for a 9.500. On uneven bars, she performed a giant full to Tkatchev and dismounted with a full-in to score a 9.350. She was clean through her cartwheel to back handspring series on beam, before dismounting with a double twist and earning a 9.750, the top beam score. On floor exercise, Vetter opened her floor routine with a double pike for a 9.575.

“I don’t think I could have won without the support of my teammates and coaches,” said Vetter. “This was my first time to compete at the Nastia Liukin Cup, and Nastia made it so fun for us. This meet was such a great experience.”

Jacey Vore of Fishers, Ind./JPAC, landed in second place at 38.000. Vore earned a 9.725 on vault with a Yurchenko full. On bars, she performed an overshoot and Tkatchev and posted a 9.375. Vore’s balance beam routine notched a 9.425. On floor, her tumbling passes were double pike, one-and-a-half to front layout and double tuck, tallying a 9.475 on floor. This is her second Nastia Liukin Cup appearance.

Faith Torrez-Foster of Kenosha, Wis./Legacy Elite Gymnastics, earned her highest score of the night on the vault with a 9.675. She performed a Jaeger and overshoot to earn a 9.075 on the uneven bars. On the beam, she executed a back handspring to two layout stepouts and double back dismount for a 9.600. Torrez-Foster earned a 9.600, the top score, on floor to finish third in the all-around with a 37.950.