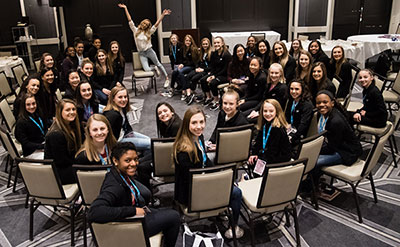 “I’m pretty much staying with the same routines as last year, just trying to perfect them, get the small details fixed up,” she said. “I want to hit the routines a lot cleaner and have more presentation and have fun and just enjoy myself.”

Dig a little deeper, though, and Lukacs breaks out a high-wattage smile.

“Actually, I do have a new floor routine this year, so I’ll be able to express myself more,” she said. “And for beam, I put in a little bit of the moves from my floor routine, so there will be a taste of it there, too.”

Lukacs is renowned for her powerful vaults, including a near-perfect double twisting Yurchenko she used to win the senior title here last year. As the junior at Bound Brook High School looks forward to her planned college career as a Georgia Gymdog, she’s spreading her wings.

“We worked with our choreographer to give me something that will help me stand out more,” she said. “The music is more of a dubstep tango, so there’s a little spiciness to it. There’s cool little music in there.” (Dubstep tangos typically have strong bassline and drum patterns.)

This marks the fourth time Lukacs has qualified for the Liukin Cup, something she considers one of her finest achievements. Tony Gehman, who coaches the gymnast at nearby North Stars Gymnastic Academy, considers the event the highpoint of many young athlete’s careers. And why not? They perform on podium, in front of thousands of spectators, and may even get to take a few selfies with Nastia herself, who maintains close ties with her namesake competition.

“This event has a different flavor than anything else they do,” Gehman said. “It has a more international feeling because it’s the podium, and that’s huge.”

Competing here is a hard-won privilege. This year’s 36 entrants, including 18 senior and 18 junior Level 10 Junior Olympic gymnasts, hail from 18 different states and were culled from invitational events around the country. Lukacs won the Greensborough Invitational for the second straight year.

“It’s very difficult to get in, there are hundreds of girls, it’s very competitive,” Lehman said. “And it’s nerve-racking. You don’t know it’s going to happen until it actually does. Sometimes, if someone else scored higher than you but already qualified, you find out at the last minute. You feel really good that you’re here. You feel like you’ve made it.”

“I think it is going to be a lot harder competition this year,” Li said. “The girls are much better and more experienced. I’m going up against people who have been here more than two or three times.”

Li is right. In addition to Lukacs, Makarri Doggette of Buckeye Gymnastics in Ohio is back for her fourth appearance at the Cup. Three senior athletes are competing in their third Nastia Liukin Cup: Texan Rachael Flam, the 2014 junior co-champion; Abby Heiskell of Waxhaw, N.C. and Cassie Stevens of Phoenix, Ariz.

Li arrived in Newark prepared for battle, armed with some valuable new skills.

“I added a Shaposhnikova-half and an endo to my bar routine, which is really difficult because I’m not too strong on bars,” she said. “I‘ve been working on it, and it’s getting more consistent and better.”

The tall, graceful gymnast is known for her long lines and fine form, which she shows off to good effect in her routines.

“I got a new floor routine, with new choreography – the music is a violin dubstep — but it has the same skills,” Li said. “I don’t really have a placement goal. I just want to do my best and have fun and enjoy this moment on podium.”

Gymnastics is a family affair for Li. Her older sister Anna was an alternate for the 2012 Olympic team, and parents Yuejiu Li and Jiani Wu competed for China at the 1984 Summer Olympics. All three are now coaches at Legacy Elite Gymnastics, a Chicago area facility owned by Li and Wu.

“Andrea competed here last year without much pressure as a junior,” Anna said. “She came in thinking, ‘Wow, everyone is so good’ and just she did her regular routines and ended up winning.

“This year is a little bit different. She’s been here before, so there might be a little more bit pressure. But she’s still coming here to have fun.”