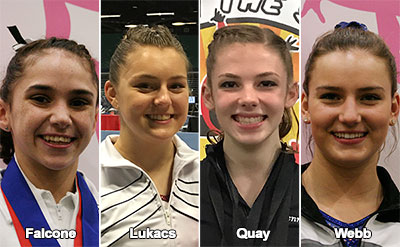 Mia Falcone of Eustis, Fla./Brandy Johnson Global Gymnastics, and Anastasia Webb of Morton Grove, Ill./IGI, earned junior and senior spots, respectively, at the IGI Chicago Style. Falcone took top honors for juniors with her 37.950 and Webb posted a 38.425 to win the senior competition. At the Glider’s Invitational, Kennedy Quay of San Diego, Calif./SCEGA Gymnastics, scored a 38.225 to capture the top junior spot and a trip to the Nastia Liukin Cup. Rachael Lukacs of Hillsborough, N.J./North Stars Gymnastics Academy, the 2016 senior Nastia Liukin Cup champion, posted a 38.575 at the Greensboro Gymnastics Invitational to earn her fourth trip to the Cup.