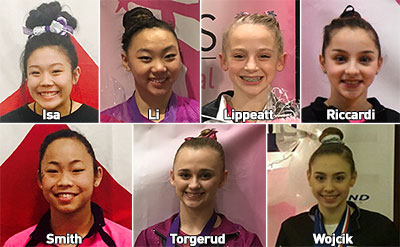 INDIANAPOLIS, Jan. 16, 2017 – Seven young women punched their tickets to the 2017 Nastia Liukin Cup, scheduled for March 3 at Prudential Center in Newark, N.J., based on performances this past weekend at six invitationals. The Nastia Liukin Cup Series continues this weekend at two invitationals scheduled for Jan. 20-22: Kim Zmeskal’s Texas Prime Meet in Irving, Texas, and the Sand Dollar Invitational in Orlando, Fla.
This week’s qualifiers are listed below, by the invitational where they qualified.