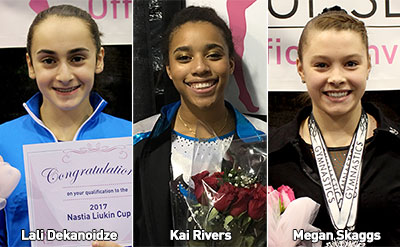 Lali Dekanoidze of Charlotte, N.C./Southeastern Gymnastics, and Megan Skaggs of Marietta, Ga./Gymnastics Academy of Atlanta, punched their tickets to the Nastia Liukin Cup at the Atlanta Crown Invitational. Dekanoidze, who will be competing in her second-straight Nastia Liukin Cup, posted a 38.175 to take the junior title, while Skaggs scored a 38.525 as the top senior at the event. At the Twistars Invitational, Kai Rivers of Franklin, Mich./Twistars USA, scored a 38.950 to clinch the senior title and earn her second trip to the Nastia Liukin Cup.