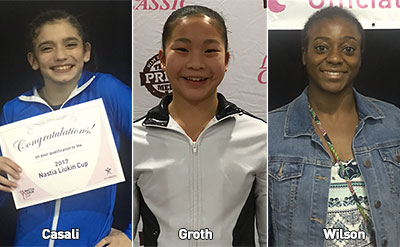 INDIANAPOLIS, Jan. 22, 2017 – Three athletes qualified this past weekend for the 2017 Nastia Liukin Cup scheduled for March 3 at Prudential Center in Newark, N.J., based on their performances at the Texas Prime Meet and Sand Dollar Invitational. The Nastia Liukin Cup Series continues this weekend with three meets across the country and four berths to the final event up for grabs.

Rose Casali of Weddington, N.C./Southeastern Gymnastics Center, junior, and Gabryel Wilson of Ypsilanti, Mich./Michigan Academy of Gymnastics, senior, punched their tickets to the Nastia Liukin Cup at the Sand Dollar Invitational. Casali posted a 38.125 to take the junior slot, while Wilson scored 38.625 to snag the invitational’s senior Nastia Liukin Cup berth. At the Texas Prime, Sophia Groth of West Des Moines, Iowa/Chow’s Gymnastics, scored 37.875 to earn a spot in the junior competition.